Following on from the success of the Allstars Festival, enthusiasm for the Allstars’ first home match of the season – at our spiritual home, the tree and bramble-ringed Barnes Common – reached yet greater heights. At one stage an astounding 17 Allstars had made themselves available: 15 showed up in person at the ground, with Martyn Langridge generously turning out for the oppo, Ash Rattan bringing wife and dog along to spectate, Haroon Khalid umpiring much of the game, and skipper Pete Cresswell serving as tea-boy and scorer for the day. Special mention goes to Mihir Mogre for travelling from another continent to make his Allstars debut – he was to impress both with the bat and in the outfield. 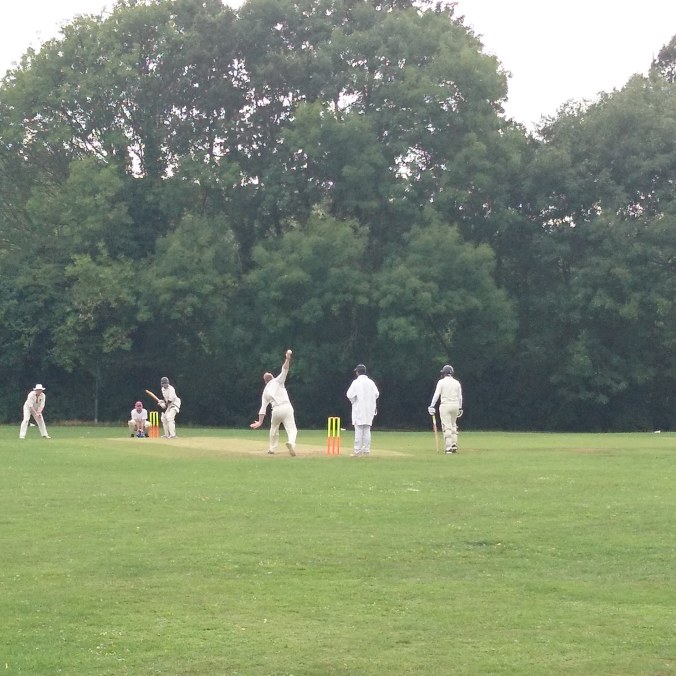 The Weasels are a long-standing Allstars opponent, and we feel privileged to be their only opposition for this year. As with last year, a number of their players journeyed all the way from Birmingham on the morning of the match, impressive dedication!

After overnight rain Barnes presented a typically spongy pitch, with a lush, but fast outfield. Allstars’ skipper James Morgan won the toss, and immediately opted to bat first – a decision he initially rued as Weasels’ opening bowlers, Humza and Samad, both started like demons. Vikash Choudhary, who had impressed with a fifty on his debut against the Gents, faced the first over from hell, surviving two close LBW shouts before being well caught by Martyn “The Cat” Langridge at slip off a ball that lifted off a length. When Dave Halladay’s first shot in anger picked out backward square leg in the second over, the Allstars were 0-2. 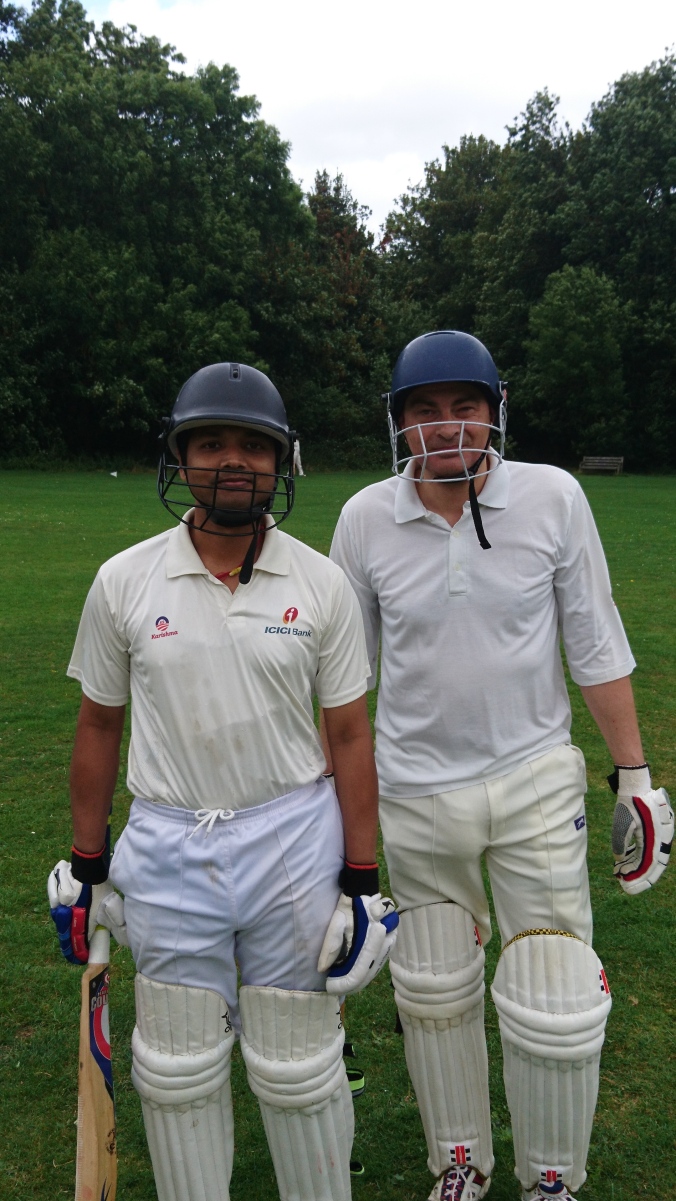 We were not to be deterred by this tough start: many great Allstars victories, most notably our breakthrough win against Trengilly Wartha in 2002, have started from similar unpromising positions. Debutant Mihir joined skipper Morgan and the pair watchfully built a 51-run stand in 8 overs, seeing off the threat of the opening bowlers, before Morgsie carved Weasels’ skipper Omar straight to cover. Sam Perera strode out at number 5, and promptly hit his second ball for 4, and his third for 6, to set a tone for the superb partnership that followed, Sam’s power contrasting with Mihir’s classical style. While occasionally troubled by the tennis-ball bounce on offer, the pair feasted on the bowling adding a colossal 166 for the 4th wicket in 19 overs, losing a couple of white balls to the Barnes shrubbery along the way. Steyn Grobler, the next man in, was being cruelly reminded of the epic Cresswell-Rattan 216-run opening stand against Mighty Wanderers last year when he spent the whole innings padded up, only not to get a bat. 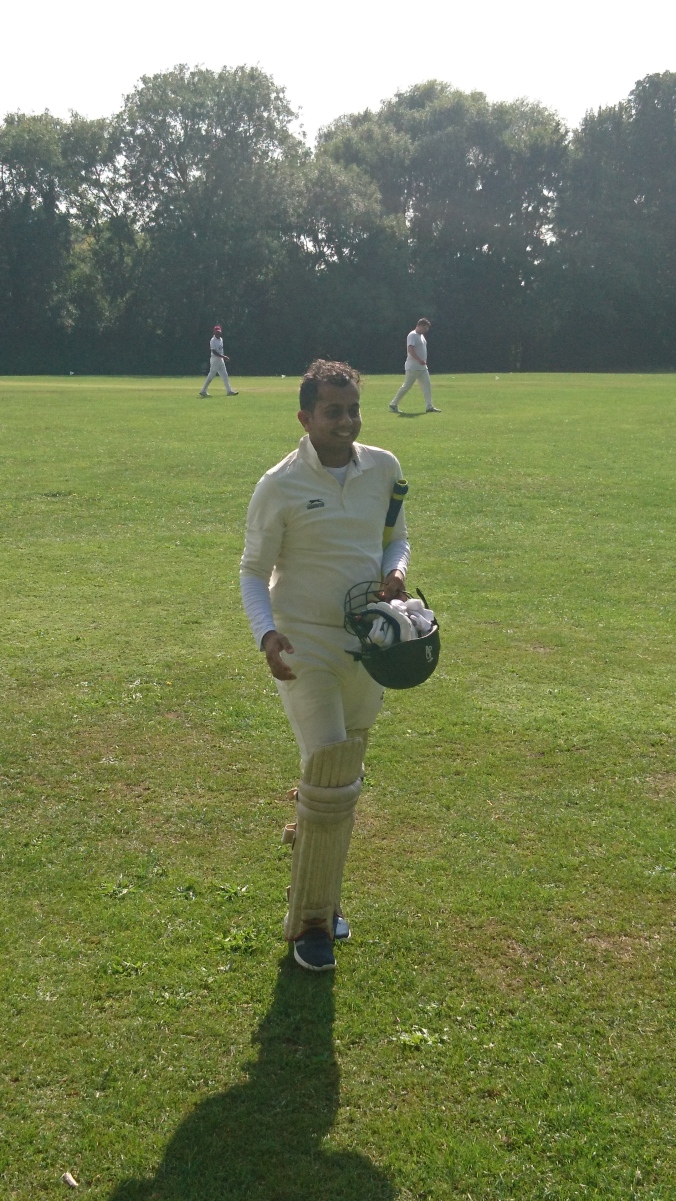 All good things must come to an end, and having completed an excellent debut ton – the first for the Allstars this season – in the 29th over Mihir fell LBW to Tom trying to accelerate. Sam was stumped charging the same bowler 2 overs later for a brilliant 74, leaving Grobler and Tony Grant to push the total up to an imposing 246, our highest of the season to date.

After adjourning for tea on the boundary the Weasels sent father and son pairing of Imran and Hamza out to open their reply. Imran found debutant Ibrar Hussain’s bowling to his liking, going on the attack from the outset, but Vikash, making the most of the strong breeze from the southern end, troubled both openers conceding just 8 off his first 4 overs. Weasels had still started promisingly – but unfortunately for them (and possibly for some family harmony), a calling mix-up and a good throw from Garreth Duncan to keeper Grobler easily ran out Hamza. Imran continued along and punished anything short – but the introduction of Sam Perera in the 9th over & the Barnes bounce prompted Imran to top edge a pull shot, the resulting skier was well held by Steyn running back from the stumps.

In the late afternoon sunshine, the pitch was slowly getting easier to bat on, and Amjad and Kandeepan then combined for a brisk 60-run stand, keeping the scoring rate well in touch with the required 7 an over. Kandeepan even reverse-swept a couple of boundaries – a shot rarely seen in an Allstars game – and at the drinks break Weasels were 106-2 with the game in the balance.

Straight after the break, the Allstars roared back with a spell which looked to have sent the game decisively our way. Kandeepan top-edged a sweep off Tony and taken in a fine running catch by Mihir. A nice cameo by Mo was ended when he charged at Jimmy Scott, missed, and lost his leg stump, and the very next ball the Weasels’ Aussie keeper Dave went in a carbon-copy wicket. With the field up for the hat-trick ball Omar swept for 4, taking the score was 134-5 off 21 overs. The asking rate was by now 8 an over – tough, but still within Weasels’ reach as the boundaries continued to come on a quick outfield.

Tony Grant continued an excellent spell, getting the crucial wicket as he deceived Amjad and bowled him around his legs – he had batted impressively, top scoring with 43. At 155-6 it was advantage Allstars – however Weasels’ veterans Omar and Iain Wilson weren’t finished yet, as they attacked the spin of debutant Max Bascombe and Garreth. Omar was run out for 19 attempting a non-existent second run, but Wilson was in fine form for an excellent 41 not out, as he put away a few loose deliveries through square leg. Max bowled Tom for his first Allstars wicket – but at 211-8, with 36 required off 4 overs, a Weasels victory still seemed possible.

Thankfully for the Allstars, the return of our best bowlers kept it just beyond their reach. The extra bounce from Sam and Vikash proved harder to hit than the earlier spin – and with 20 required off the final over from Sam, he accounted for Nathan, well caught by skipper Morgan on the extra cover boundary. The Weasels finished 15 short, and victory was ours – but 478 runs in 70 overs on Barnes made for an excellent day’s cricket. 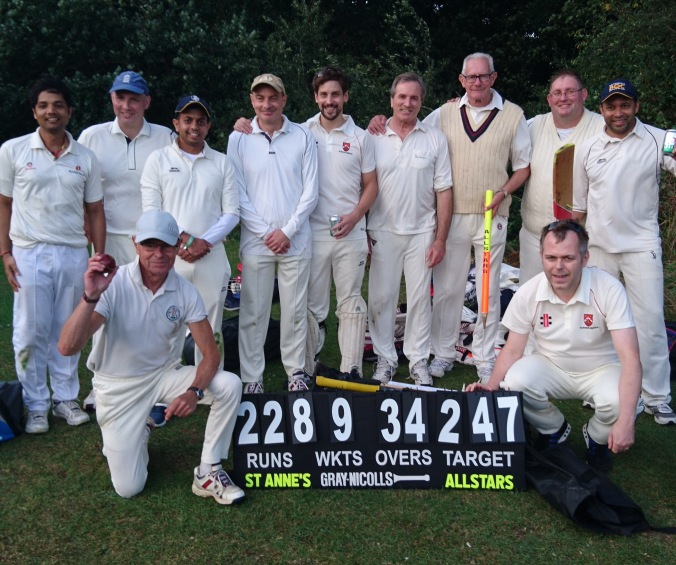 We all headed to the Sun Inn to celebrate. Onwards to Brighton next weekend, as we take on Vivek’s local team the Zambuca Tigers for the first time.

Ed. – I think Pete is being very modest about the excellent tea he made, the quiche being particularly impressive. Had it been an opposition tea, it would have been in the running for the Golden Scone award.