Words and Photos by Pete Cresswell

Finally emerging from the darkness of lockdown, the recreational cricket season burst into life as the Allstars 2020 season began with a high scoring thriller at a sunny Barn Elms.

With only 2 weeks of recruitment time available after Boris finally gave us the go-ahead to resume, the Allstars team featured no less than 5 debutants, and an incredible 7 opening batsmen. In our opening fixture of last season, club skipper Cresswell and captain for today Paul Burgin had opened for the Allstars, but the depth of batting talent available to us today meant they sportingly took their places at numbers 9 and 11 respectively. 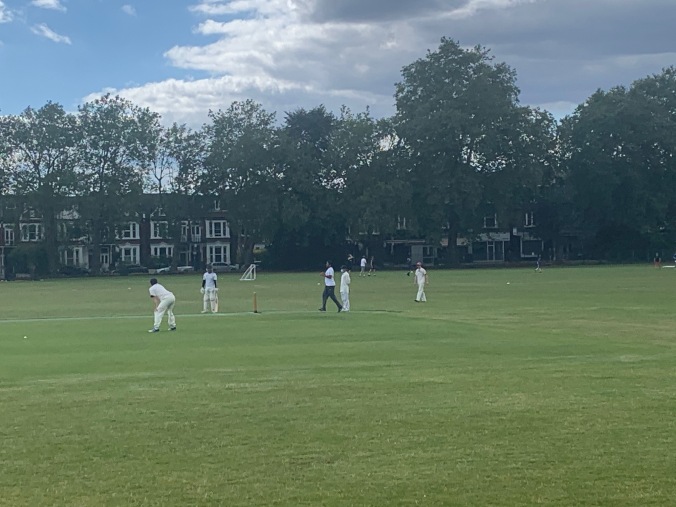 With both teams eager to get everyone involved after little time for practice, a retire-at-50 (and return later if necessary) condition was set. COVID-19 safety was of course uppermost in everyone’s minds, and we all set about it according to the ECB regulations with socially distanced field placings, masked umpires and hygiene breaks every 6 overs to sanitise hands and the ball.

Captain Burgin won the toss and opted to bat first, and the 2 Allstars Matts, Biss & Smith, strode out to the artificial wicket – to face an opening bowler also named Matt. The pair accumulated quickly, making the most of a lightning fast outfield and Corridor being a fielder short to score at 7 an over through the first 12 overs. The arrival of spin slowed the run rate slightly before Matt Smith, just three short of a debut fifty, smoked a drive straight back into the bowler’s hands to end a 91-run opening stand. 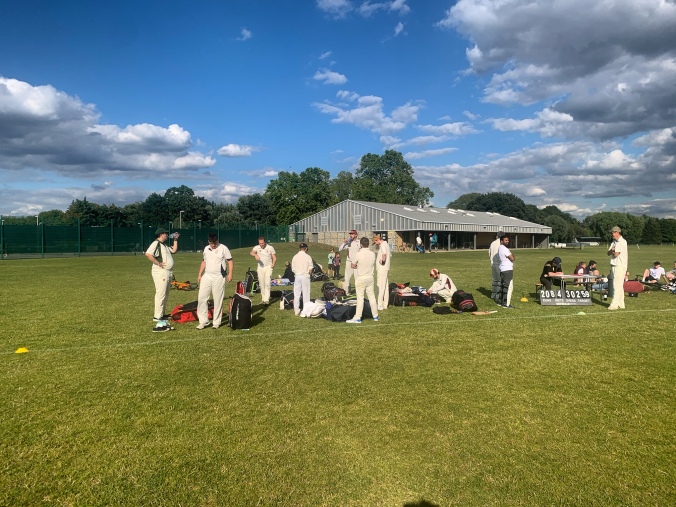 Stuart Bruce entered the fray, to be joined shortly after by his brother and fellow debutant Graham, as Matt Biss reached his second 50 in two matches for the Allstars and retired. The brothers quickly pushed the score past 150, with Stuart also retiring after smashing a 39-ball 50. A quick cameo from another debutant in Tim Parkin followed, before Jono Beagle and Sachin Singh combined to accelerate at the death, aided by Samer Hafiz after Jono was run out by a direct hit trying to feed Sachin the strike. A score of 258/4 represented an excellent return to cricket in 2020 for the Allstars, and our highest total on an opening day of a season. 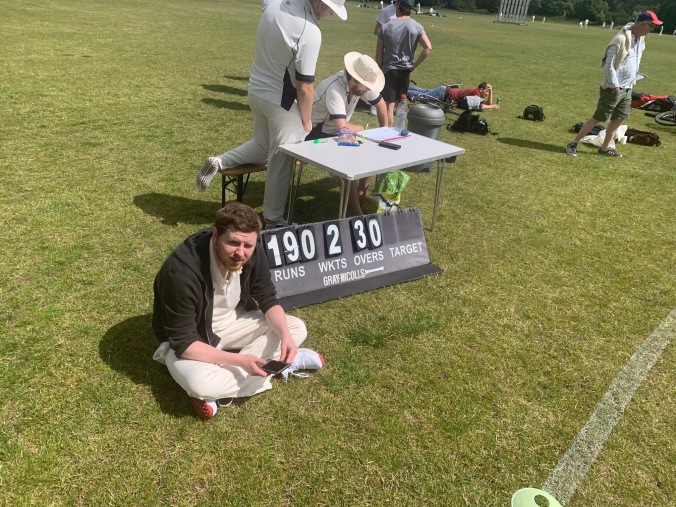 After taking our own teas (COVID restrictions meaning we had to forgo our usual shared tea), the Corridor innings began in bright sunshine. Debutant Sam Waddicor generated pace and swing from one end, while Sachin managed to generate an edge that flew through the social distancing gap between keeper Cresswell and Samer at wide slip, as Corridor began steadily until Sachin made the first breakthrough as he held on to a return catch in his third over to remove Corridor skipper Duncan Mallard. Corridor’s second wicket pair then feasted on some slower bowling from Burgin and Parkin until the aggressive Davies was deceived in flight by Burgin and bowled, making the score 63/2 in the 10th. 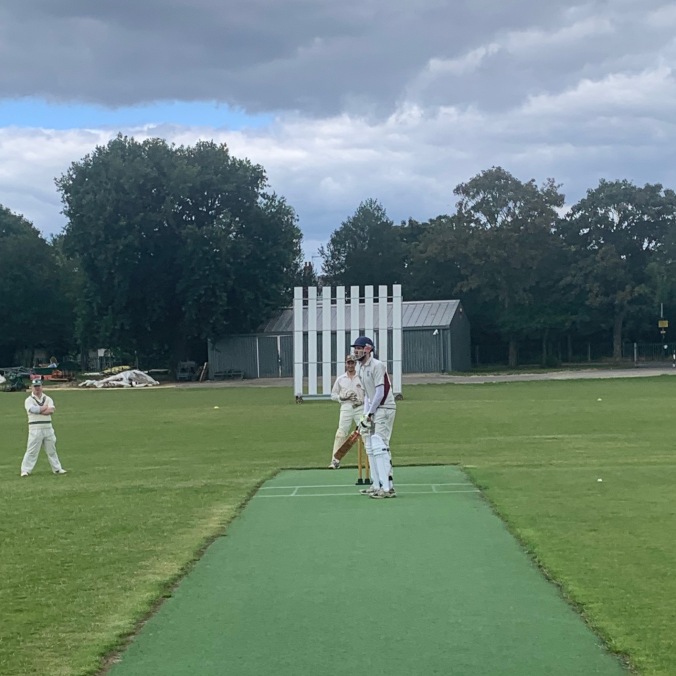 Skipper Burgin continued rotating the Allstars’ bowlers in 3-over spells to get everyone involved and keep the Corridor batsmen guessing. Their opener Smith cleverly fed the aggressive Stovens the strike in a 69-run stand, before Samer then deceived Smith who tried to cut a sharply turning chinaman and could only inside edge it onto leg stump.

Stovens reached his 50 and retired shortly after, before Sherlock holed out off Biss which reduced Corridor to 151/4 after 21 overs. But with the opposition needing 108 from 14 overs, the game was still in the balance. 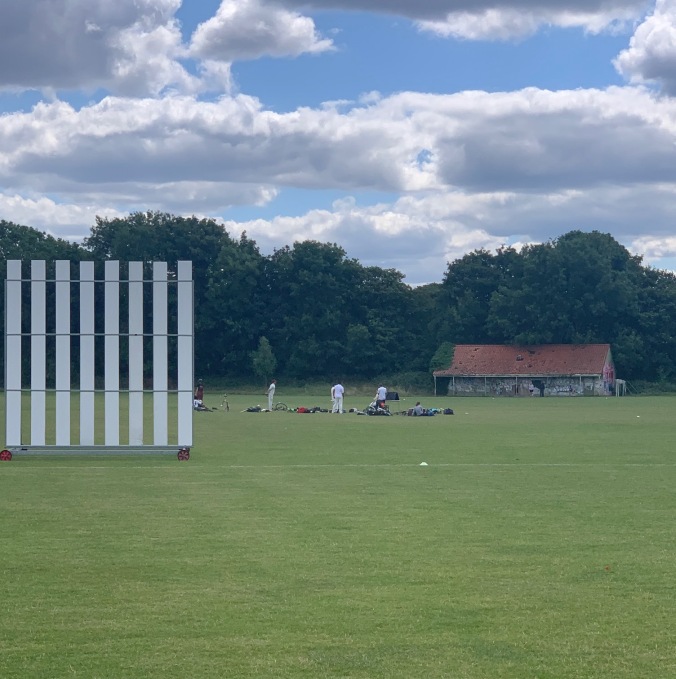 Hopkins and Parker took up Corridor’s attack, hunting boundaries on a pitch that gave bowlers little scope for error in length. They had reached 181/4 at the 3rd hygiene break, and added another 39 in the following 6 overs. With the score at 208/4, 50 were needed off 30 to force a super over – and the Allstars would be at a disadvantage there, fielding two Kiwi players to Corridor’s one. Nobody wanted such a great game to be decided on a boundary count-back.

Unfortunately Parker then top edged a pull shot off Sachin into his jaw, and retired hurt on 34 to clear his head. Thankfully, he was on good form to enjoy socially distanced beers post-match. It was then that Stuart Bruce re-entered the fray as our 9th bowler of the day, to complete a man-of-the-match all round performance. With the first ball of the 34th over, with Corridor needing 30 off 12 balls, Hopkins holed out giving Matt Smith his second catch at extra cover. Stuart then uprooted Aggers’ middle stump first ball, and cannoned the (now rather misshapen) ball into S. Raja’s pads in front of middle to complete a superb hat trick – remarkably, our second by a debutant, following Paul Nicol’s against Rain Men way back in 2002. 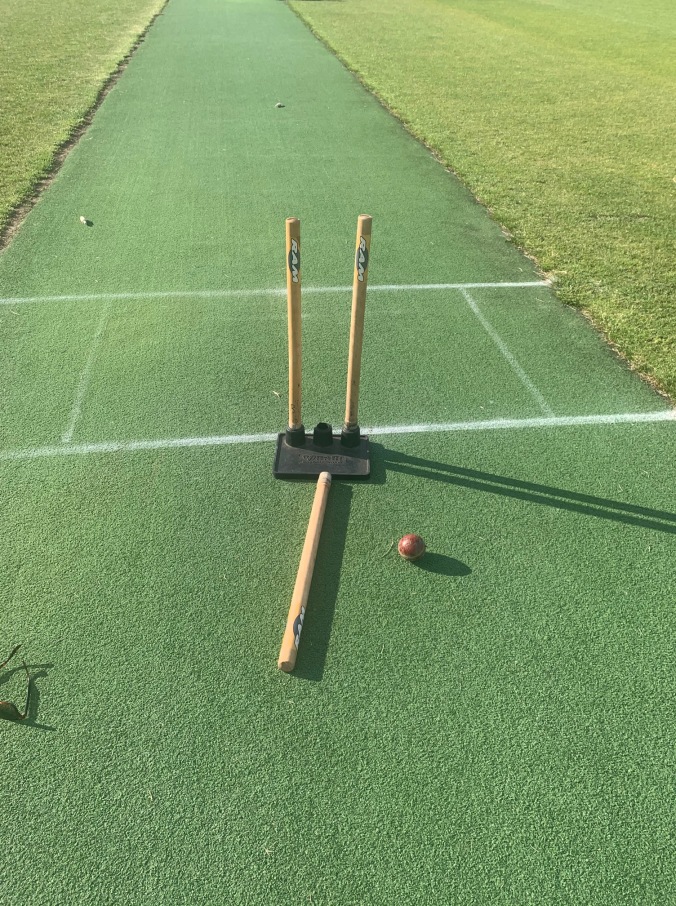 Needing 28 off 6 balls, Tucker & the returning Stovens managed to take 14 off the final over from Beagle, including a 6 off the last ball to end an excellent day’s cricket played in great spirits. We wish Corridor the best of luck for the rest of their season – in the meantime, we’ll be back in Barnes, this time on the Common, on the 26th to take on Plastics CC.

Unfortunately, in view of the COVID-19 outbreak, we’ve had to cancel our nets and pre-season dinner which was scheduled for Saturday 25 April.

We’re hoping to organise a social event for later in the year once the restrictions are lifted. In the meantime, stay safe everyone!

At our traditional venue of the Somers Town Coffee House in central London, the Allstars began planning for the 2020 season with our AGM.

On the Allstars committee, Vivek Seth becomes our new club vice-captain, and Paul Burgin our social secretary – best of luck to both in these important roles for the club.

The day of an AGM wouldn’t be complete without stopping by Richard “Rocket” Stephenson’s very own pub – and here we are! 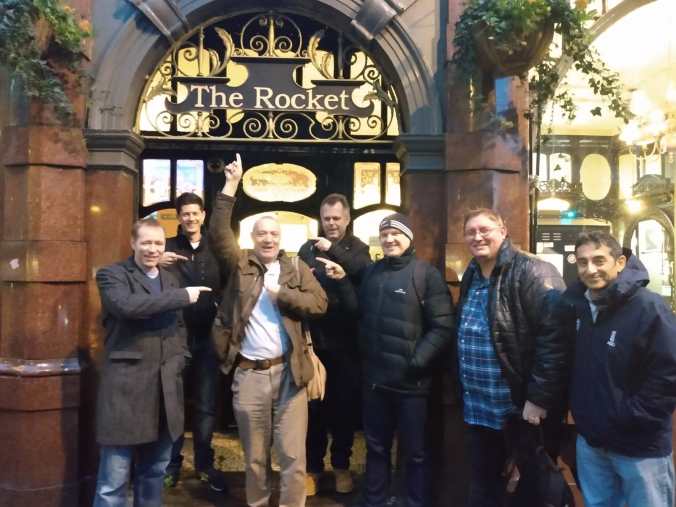 At the Parcel Yard pub in King’s Cross station, the Allstars and our other halves came together to celebrate another great season, and award the Allstars of the Year! 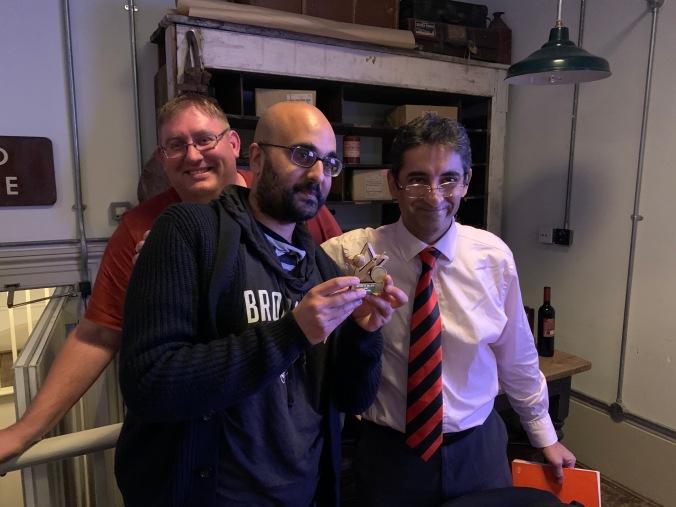 First recipient – Ash Rattan, for his great job organising the Paddington Rec nets and for the bowling performance of the season, 4-16 in our epic victory over the Gentlemen of West London. 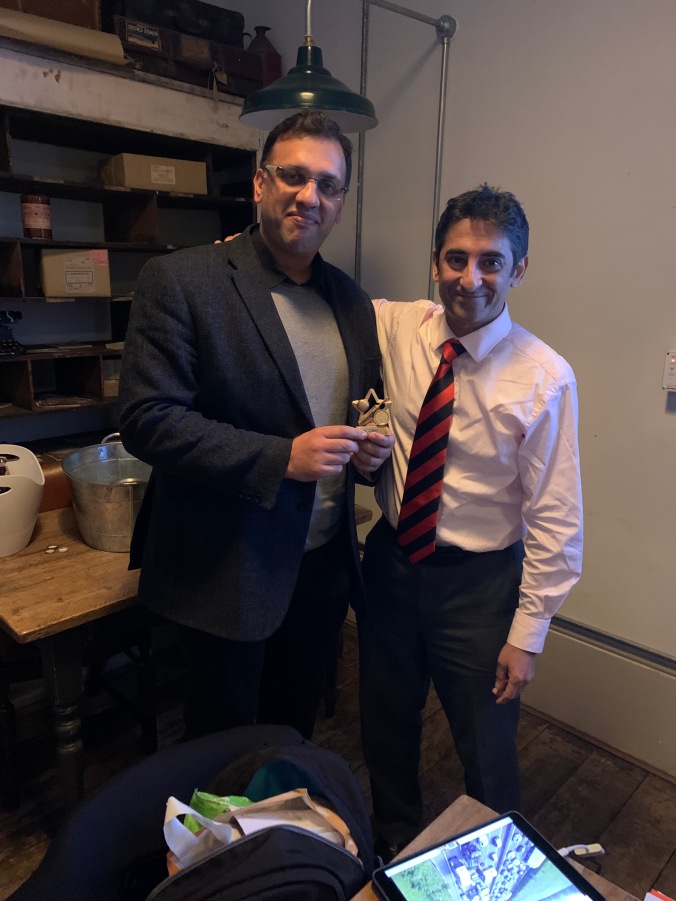 Next, a more light-hearted award – Sirmad Shafique. He batted well on the Portugal tour, but as Haroon entertainingly told us, he comically almost missed it! 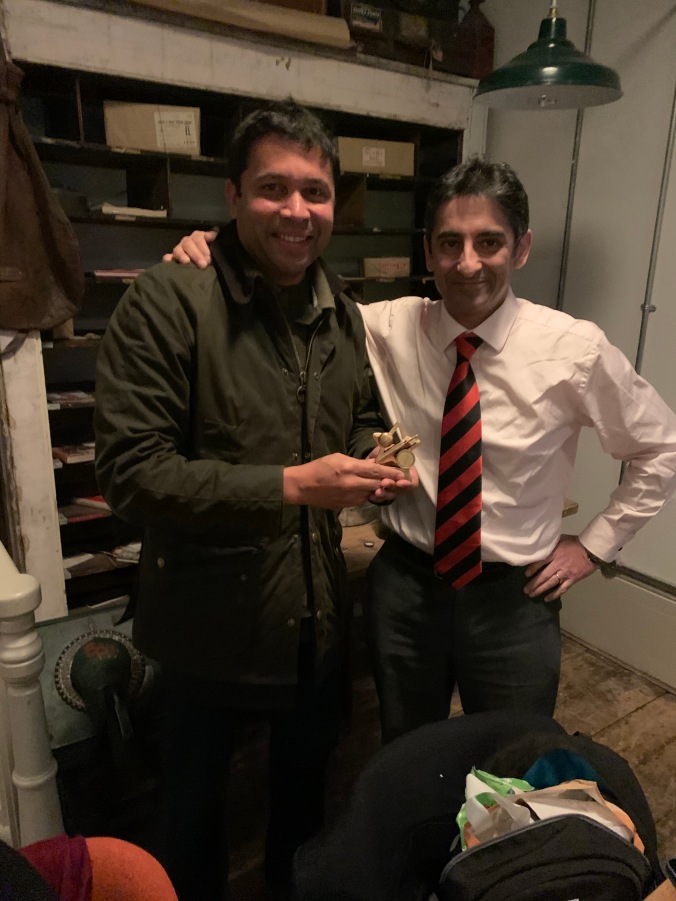 Next up – Sam Perera, our newcomer of the year and leading run scorer with 330 runs. He’s made an incredible impact in his first season with the club. 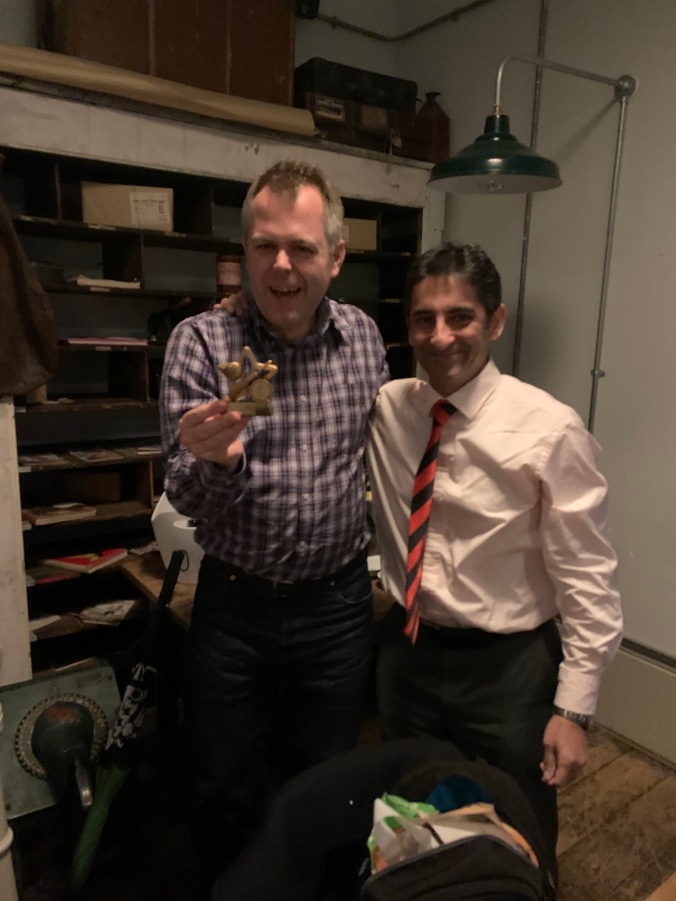 Our next recipient – club secretary Garreth Duncan, for our best ever season on the recruitment front. 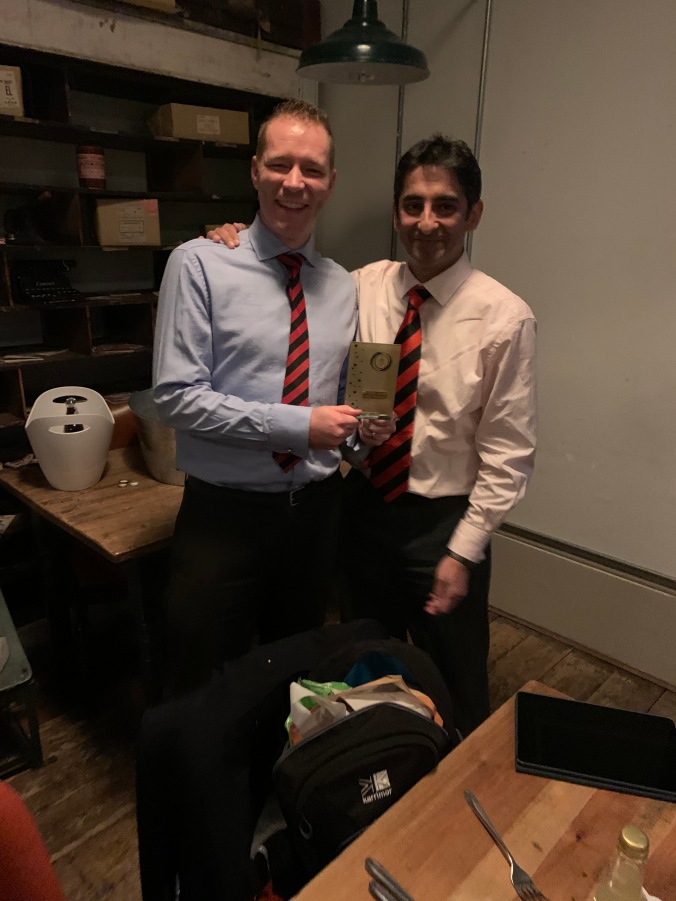 Next up – Paul Burgin picks up an award, on behalf of his brother-in-law Nick Chadwick, for 17 years’ loyal service to the Allstars. We tried to get Chadders on a TV link from Switzerland, but it was past his bedtime! 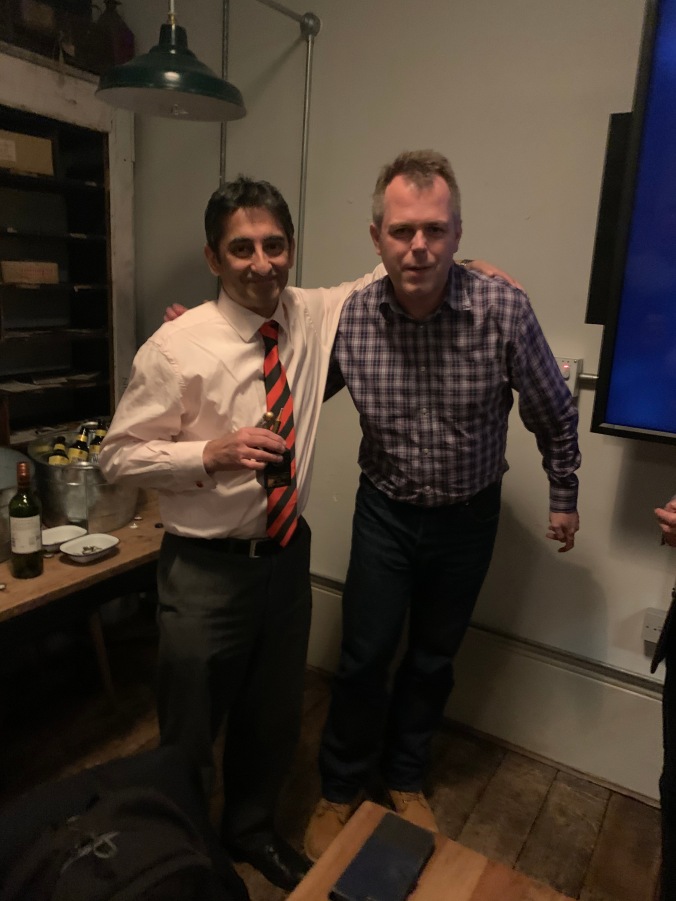 And finally – the most deserving of awards, as Garreth presents the long service award to Haroon for 10 years’ fantastic service to the club.

September brought a mini-heatwave to London, and a finish to the cricket season bathed in sunshine. At the Oval, England bowled out Australia to secure a consolation victory and a drawn Ashes series. On a beautiful day in North London, we competed fiercely in a fabulous, evenly matched game against Railway Taverners, but couldn’t quite get over the line as the Taverners avenged last season’s defeat. 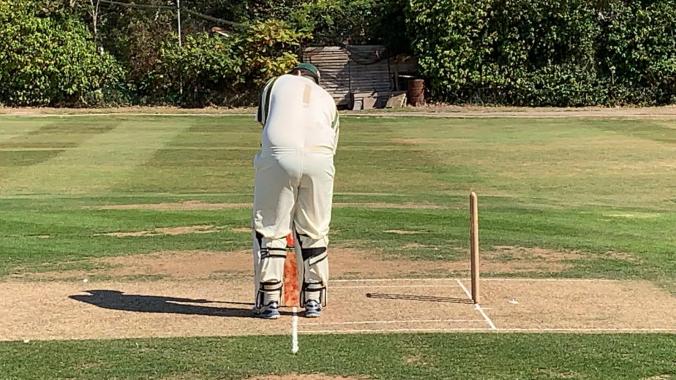 Enthusiasm for our final game continued unabated, and we arrived with 13 players, club skipper Pete Cresswell kindly volunteering to umpire and score. The North Middlesex pitch looked in excellent condition, and I had no hesitation in deciding to bat first on winning the toss. Samer Hafiz, who had spent his last appearance padded up for 30 overs of the epic Cresswell-Rattan opening partnership against Mighty Wanderers, opened the batting with Matt Biss, finally making his debut after meeting us at the Paddington Rec nets. Having got used to the pitch (which played slightly slower and lower than it looked), they quickly stepped it up as Matt got his drives going and Samer pulled Staw over mid-wicket for 6 via a tip over from the the fielder. They had put on 36 before Samer was LBW to a ball which kept a bit low. 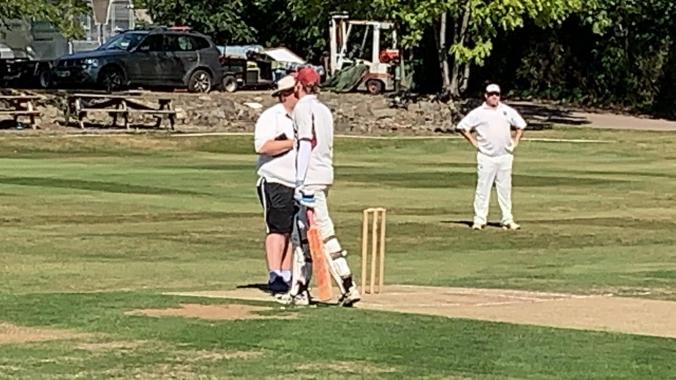 Sachin Singh started in sparkling fashion, whipping the ball strongly through square leg before he top-edged another pull of Shaw and was caught at fine leg. Jono Beagle continued where he’d left off against Crossbats as he joined his Cambridge team mate Matt in a handy partnership of 55. Jono and Matt know each other’s game well, and it was a bit of a surprise when Jono was run out – albeit to a superb direct hit.

Sam Perera has had an Allstars debut season to dream of – he will finish leading run scorer by a distance – and he looked in fine touch once again as he and Matt put on another 46 after the drinks break. But having played superbly for his 75, Matt pulled Mathias Winter to square leg. This brought about a mid-innings wobble as the return of the accurate “Jocky” brought the Taverners back into the contest. Steyn Grobler was lbw to another shooter, Dharani Ronanki cut Mathias to point and Sam became the second to pick out fine leg to leave us 174-7. Paul “KP” Bowman and Gren Thompson counter-attacked, Gren hitting his first ball for 6 as we finished the innings strongly. 219-8 looked like a decent score at the break, but we knew that we’d have work to do on a quick outfield. 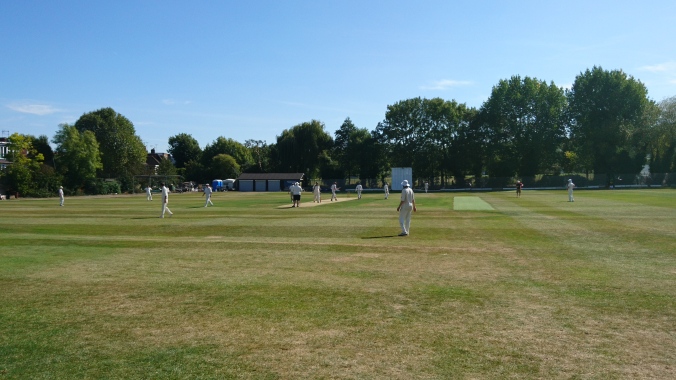 After another delicious North Middlesex tea, we took the field. KP and Gren started well against openers Ewer and Vale, but despite two probing spells they couldn’t get the breakthrough. The spell of the day was, however, still to come. Jagath Dasari has had a great introduction to Allstars cricket this season, showing pace and control in every game he’s played, but a first Allstars wicket had still eluded him. Finally, he got his reward as he produced a fabulous spell, dismissing both openers – Vale edging a snorter to keeper Dharani, and then Ewer edging to Samer at slip in the following over to leave the Taverners 39-2. 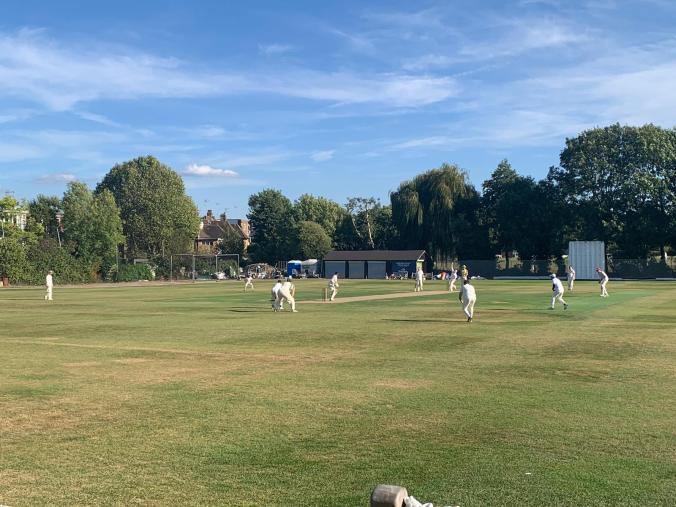 Taverners are a strong batting line-up, and their skipper Reilly and Dave Skinner then came together in a partnership of 94, beginning slowly before going for it after the drinks break. Vivek Seth bowled tightly again, and finally dismissed Skinner to another sharp catch from Dharani after he’d passed 50. Sam struck in his final over to bowl the dangerous Spee. The Taverners still needed 53 off the last 4 overs – but by now the bearded Reilly was fully into his hitting arc, and was joined by Greg Powles. We gave it our all – but we couldn’t prevent them knocking off the runs with 2 balls to spare. 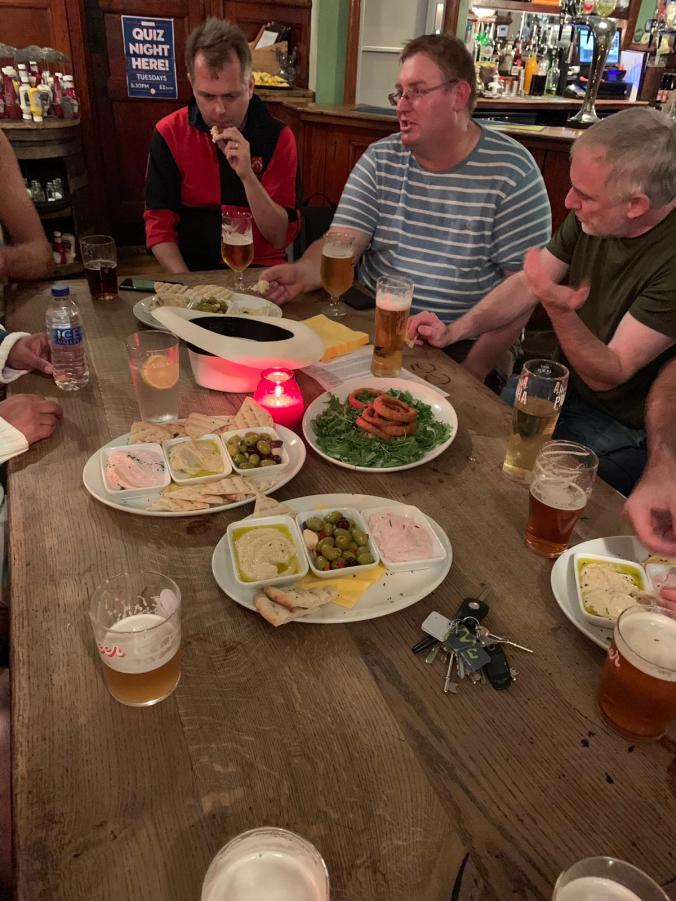 So the regular season ended in defeat – but it didn’t stop us from all enjoying a drink together as we celebrated another great season. The Taverners are a generous bunch, and treated us to a fabulous spread at the pub in Crouch End which gives them their name. We look forward to playing them again next season.

We will still end our season in style with our tour to Portugal – and we then have our end of season dinner on 9 November to look forward to.  Many thanks to everyone who’s played for us this season!