It was a weekend of sport which will be forever etched on the memories of those who witnessed it. In the greatest one day cricket match of all time, amidst unbearable tension at Lord’s, England prevailed over New Zealand in a champagne Super Over to win the World Cup. At the same time, across London, two tennis greats went head to head in the Wimbledon men’s final as Novak Djokovic overcame Roger Federer in a fifth-set tie-break. While we couldn’t match the sheer, seat-of-the-pants excitement of those two classics, on a picture postcard Kent village green the Allstars battled hard and deservedly emerged with a draw.

Despite falling agonisingly short of victory against Mighty Wanderers the week before, cricket’s feel-good factor resulted in a wave of enthusiasm unprecedented in our history. The lure of the game was so irresistible to so many Allstars that we had 15 signed up at one stage – a couple of late dropouts meant that we played with 12 and I resumed my old school cricket role as full-time scorer for the day. This gave me the chance to try out a new scoring app, which worked a treat and enabled me to send out the full scorecard on WhatsApp straight after the game.

Skipper Pete Cresswell lost the toss, and we fielded first. But it didn’t seem a bad toss to lose, as cloud cover persisted through the afternoon and gave the bowlers a bit of assistance. Paul “KP” Bowman opened up and got some movement straight away, giving Matfield opener Greg Dann a testing start. Dann might have been caught at mid-off second ball, but the fielder was a fraction late in starting for the catch and the ball landed just short. This was to typify our day in the field, as the breaks just didn’t go our way throughout Matfield’s innings.

Dann quickly got going with some crunching drives down the ground, with the lightning fast outfield meaning anything that pierced the infield went to the boundary. The moving ball and occasional shooter made it a tough day for first-time keeper Sachin Singh, and extras helped move the score on throughout. Ed Heelas also got some swing in a tidy opening spell, but without any luck. But KP continued to trouble both openers, and struck first as he knocked back Justin Bowden’s stumps.

Jagath Dasari once again worked up a good pace, and can feel especially unlucky not to get his first Allstars wicket by as the half-chances in the field continued to go against us. Shanmugam Sama replaced Ed, and started in good rhythm. But Dann was well into his stride by now, and Euan Cooper, after a slow start, also began to time the ball sweetly. At the drinks break Matfield had reached 108-1 and it was looking ominous for the Allstars.

Dann and Cooper both went to their fifties, and as their partnership passed 100 a massive score looked likely. But as we took pace off the ball, the run rate slowed and we found a way back into the game. Vivek Seth’s bowling has come on in leaps and bounds the last couple of years, assisted by weekly nets at his other club Zambuca Tigers, and he produced his best spell in an Allstars shirt as he bowled a tight line and even broke Cooper’s bat. Jimmy Scott, familiar to the opposition from his many appearances at Matfield for the Canbashers, also bowled well, and got the breakthrough as Dann was caught at cover by his old mucker Chris Woods. Next over, Vivek finally got his reward as he took a sharp caught-and-bowled to remove Sutton. Tony Grant struck with his first ball to bowl Euan Cooper, and three wickets had fallen for 11 runs. Matfield skipper Hal Cooper and Shawn Spies stopped the rot, and finished with a flourish as they passed 200. Their final total of 216-4 was a good effort, but we certainly thought it chaseable.

Matfield treated us to a fabulous tea, their scones and cream and hot sausage rolls standing out amidst an excellent spread. It was a team effort – though one of their number got some serious stick from his team mates for the lamest excuse ever for failing to help out with making tea, claiming as a left-hander he “couldn’t butter with a right-handed knife”. Suitably refreshed, we set about the chase. Openers Pete and Chris started cautiously against the excellent “Spees” – as the oppo told us he likes to pronounce it – and Craig Butfoy, as just 16 came off the first 6 overs. The score then doubled in the following over as Chris went on the attack, hitting Butfoy for two monster sixes down the ground. Both openers then went in quick succession, Pete run out going for a sharp single and Chris caught behind off Spies, to leave us 43-2 after 11 overs.

Sachin was joined in the middle by KP and both kept the momentum going. Sachin was still troubled by an ankle injury he picked up in a previous fixture, so he dealt almost exclusively in boundaries with some scorching cover drives. KP was just beginning to get going when he was caught and bowled by left-armer Lewis Overy, who then got a second when Sam Perera, after a positive start and the second broken bat of the day, was incredibly held one-handed, Ben Stokes-like, at mid-off. Sachin then fell LBW to the tall Ash from a ball which kept a bit low, and we were 87-5 with plenty of the mandatory last 20 overs still to be bowled. 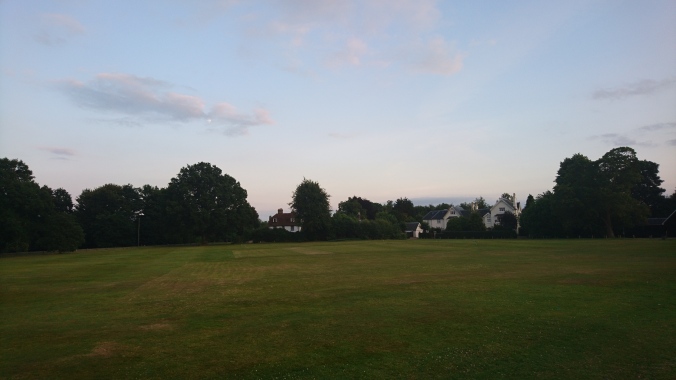 At this point, we had no choice but to shut up shop, and TG and Jimmy began the resistance. It is great to see them both still enjoying their cricket so much. Despite being perhaps the oldest ever Allstars batting partnership, like the Rolling Stones they have the lust for life which would put men much younger to shame, and they defied the Matfield bowlers as they continue to defy the years. Jimmy was to get out in bizarre fashion, as the ball deflected up off his pad onto his glasses and into a fielder’s hands – only after the game was it clarified that the mode of dismissal was LBW. Vishesh Sharma replaced him, impressively reining in his instinct to hit out as he blocked out 16 balls before being taken low at midwicket off Iwan Shotton.

With 8 overs still to go, we were 112-7, and the draw still far from secure. But on this day nothing was getting past TG’s broad bat, as he continued to block solidly while still dispatching the odd bad ball for four. Ed, a mighty fine number 9, was also rock-like in defence, and the overs slowly ticked off. Spies came back for one last go, but got nothing as TG and Ed continued to stand firm. He and Hal Cooper had finished off the tail with some sharp pace as we fell just short of saving the game last year, and we were perhaps fortunate that Cooper’s knee problem meant he could only bowl two overs of spin this time – but in the end, we saw the last couple of overs out with ease to secure the draw. TG’s determined innings of 17 not out took him 57 balls, as our new scoring app confirmed, and he was deservedly our man of the match.

So the Allstars were in high spirits again as everyone celebrated a great game of cricket in the Star Inn afterwards. Matfield were generous and sociable opponents, and we look forward to visiting them again next year. Many thanks to everyone for playing, to Haroon Khalid for driving down with the kit, and to Chris’s daughter Charlotte for devotedly watching us play all afternoon.

So we move on to the highlight of our domestic season, as in two weeks’ time we all gather in Dulwich with our families and friends for the Allstars Festival. Hoping to see you all there!