If there is a cricketing heaven (writing as a committed atheist), it probably looks something like Matfield. A cricket pitch right on a beautiful village green, surrounded by pretty cottages with a pub a stone’s throw away.  The club goes back over a century – World War I poet Siegfried Sassoon played for them and is remembered in their annual “Flower Show Match” – and their president is no less than Kent and England legend Derek Underwood, who popped along to watch some of the game.

We last visited Matfield in 2007, when we faced the Canbashers in one of the all-time Allstars classics, and when the Canbashers decided to relinquish their fixture we were eager to take it on.  With spirits high after England’s World Cup quarter-final victory the previous day, we were fired up and eager for our first win of 2018.  We were to fall just short – but only after a thrilling encounter where we stayed in the contest almost right to the end.

With the temperature over 30C, losing the toss and fielding first wasn’t particularly what I had in mind.  Gren Thompson, returning to Allstars action having become a dad for the second time, opened the bowling and quickly settled into an excellent rhythm and good pace, while at the other end Martyn Langridge kept things tight as usual and gave little away. Matfield opener William Izzard tops their batting averages this season, and he showed why as he started brightly with some powerful cover drives. On a lightning fast outfield, anything that pierced the infield flew to the boundary – but Gren struck the first blow as he bowled Izzard with one that kept a fraction low. 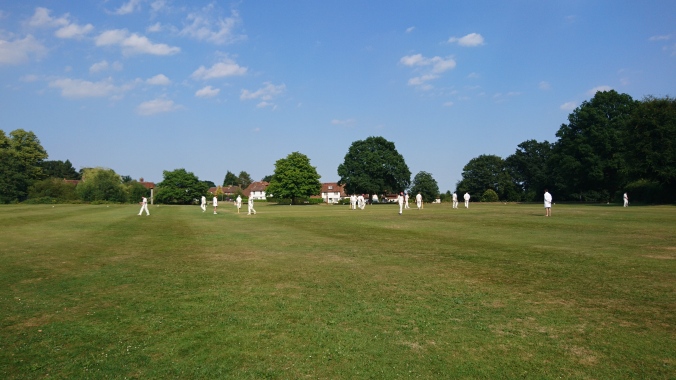 Sachin Singh replaced Martyn and continued where he’d left off against the Gents, with a good line and a useful quicker ball.  Opener Keir Hoffmann liked the late cut and got a couple of boundaries to third man, but Sachin was always in control and was finally rewarded when he went for the leg side and was taken by Gren at square leg.  Vivek Seth began a little nervously as number 3 Ewan Cooper went on the attack – a fabulous catch by Martyn at mid-wicket chalked off by a no-ball call – but Sir Viv also settled and he too got his reward as he had Shotton was caught at mid-on by Priyal de Zoysa, making his first appearance for the Allstars since guesting on our Hampshire tour in 2009.  At the drinks break Matfield were 93 for 3 and we were well in the game.

Kerrie Timm, the Rasta man from St Vincent, strode to the crease and went for some big shots at everything. We gave him a couple of lives as catches went down – but he always looked like getting out, and was easily stumped as he walked down the wicket at Priyal. Ewan Cooper continued on and reached his 50 before, a little surprisingly, being retired by his captain.  Joe Silmon came on and teased with his leg-spin, getting some turn from the dry pitch.  But even as Matfield tried to accelerate, excellent Allstars bowling and fielding wouldn’t let them get away.  Gren returned and got a second wicket as he bowled Greg Dann – this one also keeping a bit low.  Matfield declared at 188-5, and we went into the tea break pretty happy with our work in the field.

Matfield’s tea was of the highest order and is already rivaling Heartaches for the Allstars’ prestigious Golden Scone award – ice cream being particularly appreciated on a hot day – before we began our run chase.  Was this to be our day?

Matfield opening bowlers Hal Cooper and Shawn Spies both looked very handy, but for once we avoided a top-order wobble as Pete Cresswell and Priyal got us off to a decent start, Pete getting solidly behind the ball and Priyal finding the boundary with cuts and drives.  The opening bowlers had been seen off before Pete, unselfishly trying to push the run rate on, was caught at extra cover as he drove at Dann.  Priyal went soon after, bowled by Justin Bowden as he went for a big drive having scored a handy 28.

Having started slowly, we began to up the pace as the last 20 overs began.  Jimmy Scott, warmly welcomed back to Matfield by the opposition who know him well from Canbashers, rose to the challenge of being promoted to number 3, and scampered singles to keep the scoreboard moving as well as hitting a couple of lovely fours through cover, before he was bowled by Matfield skipper Peter Danby.  Sachin also went for his shots as he punished anything short or wide, hitting 3 fours in an over as Dann was hit out of the attack – but Bowden got him too after getting a useful 21.

At 89-4 we were still handily placed – but the innings of the day was only just beginning.  The white Chris Gayle, Sam Macdonald, was quickly into his stride, driving strongly and ruthlessly punishing anything short or leg-side.  Ewan Cooper got the treatment as Sam hit him for three leg-side sixes in an over, as the run-rate came within range.  Paul Nicol, taking a break from table tennis to return to the Allstars, provided good support before getting out to a poor LBW decision – the big inside edge even being audible in the pavilion. Where’s DRS when you need it?  At 136-5, with 6 overs to go, the match was still in the balance.

Sam Macdonald, our star of the day, with Matfield president Derek Underwood

Gren joined Sam in the middle and he too hit some sparkling shots, leaving victory within tantalising range.  But the return of the opening bowlers was to end our dream.  Hal Cooper, who tops Matfield’s bowling averages, struck with successive balls, bowling Gren and trapping Joe Silmon LBW.  Sam reached his fifty in the next over – but with partners running out, Spies bowled him as he continued to push for victory.

With all our specialist batsmen gone, we could only play for a draw.  I kept out three deliveries from Spies, but he got some extra bounce from the next one and I could only edge it to gully.  With just 10 balls remaining, Hal Cooper rearranged Martyn’s stumps, and it was all over.  But on a fabulous day, cricket was most certainly the winner.

Socialising with Matfield in the Star Inn

Matfield were the most generous of hosts, serving us some great food after the game.  After a classic encounter where we came so close to victory, we’ll be keen to go one better next season. This year, maybe we’ll just have to settle for football coming home …